It felt like it should be in the backroom 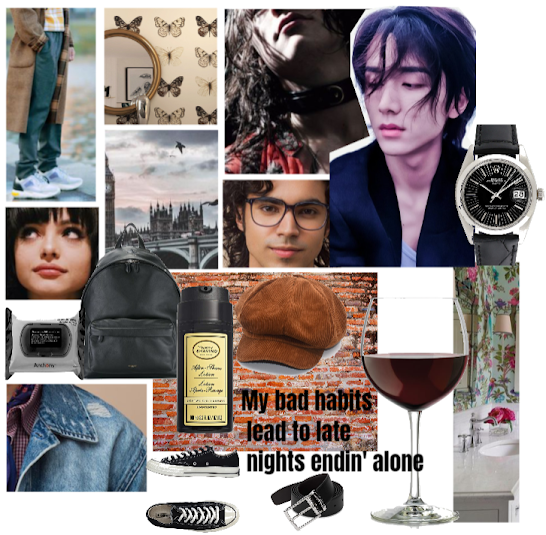 Of course, Odin was a bit troubled having Stu tag along for dinner. But then again, it balanced out everything so evenly at the table, like they might really be a good circle of friends. Naturally, Stu made himself at home with the bottle of red wine.

"What's up with you, mate?" Odin didn't mean to fester his anxieties, but what was Stu up to?

Stu's smile was open as he gave his old friend a tried laugh. Odin obliged with a tense smile. It was as if he was playing along too, but didn't mean it. Not really. He was just here for Shelly. Honestly, he didn't know Mia at all, but evidently, she was a good friend to Shelly.

Odin winced. Was Stu nervous about something?

"Not a lot." He looked a bit blue as he sighed and drank his wine.

"Hold on." Odin put his hand over his glass before he could have another. "Dinner is coming."

"Are you sloshed, already?" Odin tensed. Shelly gave him the eye. The next thing he knew was to hurry Stu to the loo.

"What's got into you, Mate?" Odin looked at him practically sideways as Stu propped himself against the sink. He stared at the three stalls.

"What is it with you, old boy?" Odin practically sneered as if he couldn't believe Stu was on a binder before he got here.

"Nothing." He was practically mute with his fingers in his jean's pockets, slouching like he could be someone famous. Stu winced a tear then. "Those days are gone, you know."

Odin nodded. He really did need to use the loo so he excused himself. That's when Stu told him he was back at the bakery. "Can you believe it, man?"

Odin only flushed the toilet for an answer. Really, he had nothing to say to Stu. It felt as if they were on to a bad night after all.

From this day forward 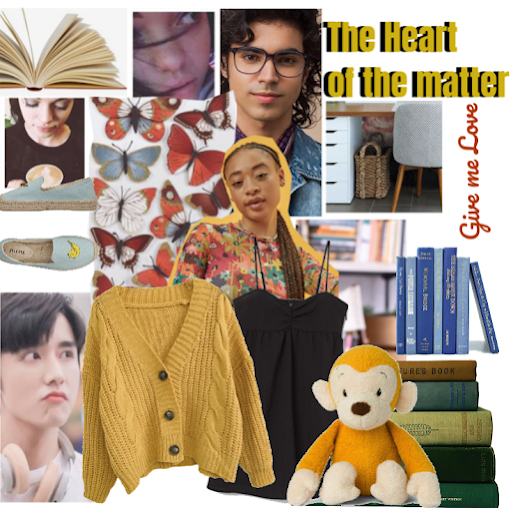 Honestly, Shelly didn't want to rely on Odin for everything. She couldn't help but live in her office these days. Although, that was quite a feat with so many books in her cluttered space in the back of the shop.

Sometimes, she found herself practically lost at sea. Except, it was books piled around her and everything else she'd accumulated along the way. She'd catch herself staring at her cluttered world, imagining the worst.

She nursed her bottom lip wondering what it would be? A landslide? Maybe a fire would break out. Then what? Yes, her life was a mess. And if that wasn't enough, she was full of envy with Kate and that layabout of hers. Did they even have jobs? She didn't dare tell anyone of her woes.

Funny, how Mia and Odin both showed up at the same time. It was late in the evening. Odin came to rescue her. Mia was there to let her know she'd found some help that might help get the shop in order. She did have connections after all.

"Then let's have a bite to eat," Odin grinned as if the sooner they could get Shelly away from the shop the better off she would be. After all, it was nightfall.

Shelly hesitated. She'd vowed this was her only home, but here the two of them were doing their best to prod her along. Naturally, they didn't know each other. It wasn't until after she locked up that she introduced him. She just assumed they knew who each other was to her. After all, Mia said she never shut up about Odin while they were at their lunches, and sometimes Odin told her that she spoke of Mia in her sleep.

Shelly looked at both of them now. Mia carried her satchel with her laptop and Odin carried her little backpack of necessities. Yes, they must have been the two of the most influential people in her life. They each looped their arm around hers and off they went as if they might have a rainbow road to find.

"Where shall we go?" Odin asked first.

"What does it matter?" Shelly was of course down on her luck. A biscuit would do as far as she was concerned.

"Let's go to that place that serves the lovely French wine," Mia said. "My treat."

"Oh, I dunno." Shelly batted her thick lashes as if she wasn't hungry, but of course, her stomach grumbled.

Shelly only made a face that she just couldn't.

Just then on the next block was Stu waiting to cross the street toward them.

"Hey, mate!" He waved with a bright smile.

"Where you going, bloke?" Odin of course was happy to see his best mate. "It's been ages!"

"No, it hasn't." Shelly hadn't meant to lash out, but was it taking a toll on Odin to spend these days with her?

"Right!" Odin smiled looking down at Shelly her arm wrapped around his. He petted the top of her head as if who was loyal now? He went on to introduce Stu to Mia. It was a bit tepid. Shelly wanted to be indoors.

"Want to join us?" Odin asked as if they best get on their merry way.

Shelly noticed that look in Stu's eyes as he looked back a Mia. His smile was quite silly, she thought. Naturally, he said sure.

Shelly sighed but didn't dare let it slip that this could be a bad idea.

And I ain't got much else to lose 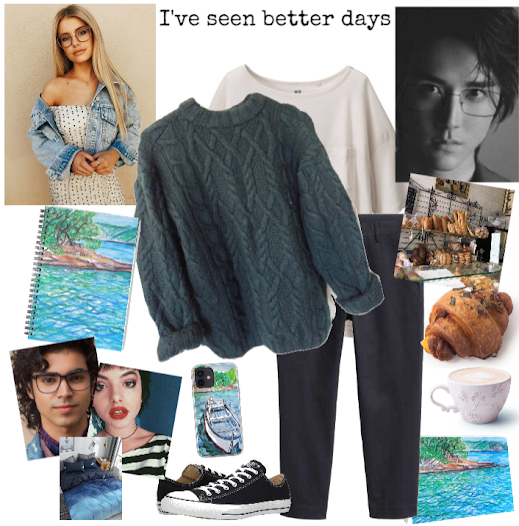 Stu felt he'd been walking the streets for weeks, even if only for a few days. Sure, he hooked up with some lass at the pub. That had lasted all of two days. Evidently, she got her fill of him when she realized all he wanted was a place to sleep.

He didn't mean to be down and out. Honestly, he thought Odin would have thought more of his predicament than old Shell's. What did he see in her anyway? Stu stuck her for the Debbie Downer sort. It would not work out. He could have already told him, but that was one love-sick bastard in Stu's book.

Oh, he really needed a drink, but thought it best to stay away from the pub. He was after all, short on change. Honestly, his pockets were empty in his old chinos. Only with a tee and an old pull-over sweater of Odin's, Stu didn't have much to call his own. Even his undies were a pair he'd stolen from Odin. Hopefully, there was nothing special about them. Well, maybe he needed some sort of magic to get him through this move back home.

Of course, he had nothing to go home to. His mum went off to Greece with his Dad's old friend. Who knew she was that kind of woman. Sure, Dad was long gone, but to take up with the likes of an old sailor still, left Stu gasping. Naturally,  a young new family took the house. Yes, he supposed that was the propagating of nature. Somehow Stu felt stuck.

Finally, he came around to where he worked when he was a teen. It was a bake shop. Actually, it still smelled as fragrant and inviting as it always did. And Miss Leona was still there making her fresh bread and sweet pastries.

"What happened to you boy?" She asked immediately as she fetched him one of her savory brews. He wasn't quite sure if it was actually tea, but whatever. He needed it.

His smile was faint. Did he look that bad?

"Not a lot." He shrugged and was happy she brought him a croissant with cream cheese and strawberry preserves.  He knew it was a day old, but it made no difference to him. "Down on my luck, you know." He told her how he'd gone to New York for a season or two. "I just wasn't what they wanted at the company, evidently." There had been the pandemic. "Gawd, I couldn't wait to leave. I saved up every penny and swore I would go home or else."

Maybe it was a mistake now since there was absolutely nothing to go home too. Still, it was a pleasant surprise to find dear sweet Leona, after all. Even better when she took his hand.

"Well, come back and work for me." She had a little room available up above the bake shop. "I'd feel so much better to have someone here to watch over the place."

Stu hoped he didn't look too ecstatic, but seriously this was the first good news he'd had in a very long time.

when the nights are cold 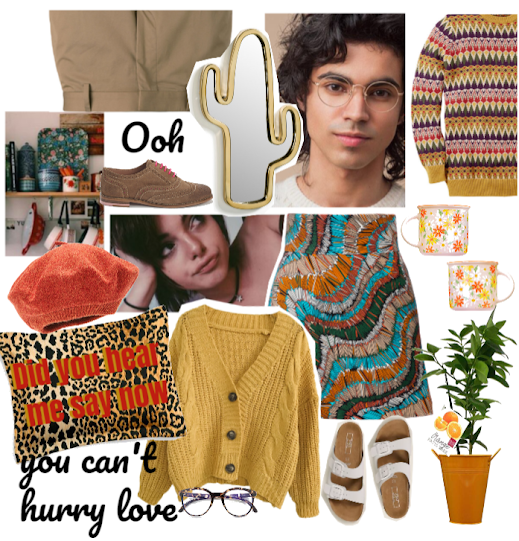 Odin wasn't sure what Shelly wanted to hear. Yes, she was devastated. As she sat there on the floor of his apartment with her back against the loveseat that was in front of the foot of his bed. It was quite cramped here, but it really never bothered him, until now.

"I'm here for you," he said with his arm around her. She was staring at her warm milked tea, not saying much of anything.

"You'll be fine. Don't give that Kate anymore of your time."

"Yes," Shelly blurted. "But..but she always said she'd be there for me." And she crumbled into tears. It was as if she had use for no one now. Not even Odin.

"I'm not a liar. I'm here for you. You can just, you know..stay here." He looked at her ever so sadly. She heaved a sigh.

"I believe in you, you know. I have faith in you and the book shop." Even when he said it, he knew she felt as if all the world had left her.

"You really are my love you know, I want to be everything you need." What more could he say.

"It's just not possible," Her eyes shifted from him as the back of her free hand wiped away the fat tears. "Sometimes, I just wish it was all over."

"Stop thinking that way." He winced. "You don't mean it. You know your quite funny and clever too."

"Are you saying I'm daft?" She wanted to know as she drew a frown.

"No." He squinted harder. Just when he was hoping to console her, there she went building walls around her. "Stay the night, will you."

She pressed her lips tight. "Where would I go anyhow. It was never my home, now was it? I was only staying there to take care of it while Kate went on her merry way, wasn't I?"

"Oh, stop making yourself feel so low." He got up to find some crisps. If she didn't want it, he'd eat it just to keep his mouth shut.

She looked at him with the fresh bag of crisps. Of course, she took it from him before he could even open it. But she did give him the first crisp. Odin quaintly took it. Perhaps it wasn't a total waste of time of her being here. Shelly could be quite cozy. Although, one had to wait for it to happen. 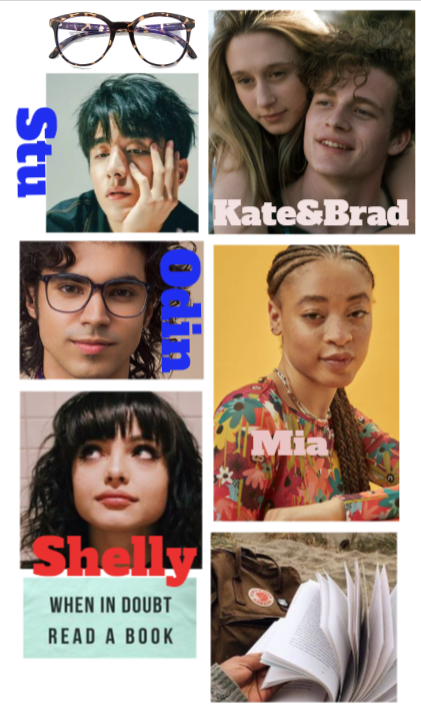 Here I am again. Hoping to refresh this blog. I have thought of a group of offbeat twenty soon to be thirty somethings. And a book group of sorts at a coffee shop.
-ellie